Opinion: What the flaming monkey balls is a UX Designer anyway?

Tools and deliverables don’t define what a UX Designer is or does. But how do we describe ourselves to other people without this convenient mechanism?

I was recently having a little check of my LinkedIn. Aside from my profile once again being incomplete (I strongly believe it is impossible to have a complete LinkedIn profile for more than about 24 hours) I clicked on a couple of UX jobs out of interest.

Four of the five postings contained Adobe Creative Suite as a requirement in the first three bullet points of the job spec. Now this in itself doesn’t surprise me. More than likely these companies have met plenty of candidates in the past who came to UX from a visual design background and are probably pretty damn good at their Gaussian blurs. Indeed I even wrote a post on hiring people from different backgrounds.

But is Photoshop really a must have requirement for a good UX Designer? Probably not.

Closely followed behind in the job spec are normally things such as wireframes, prototypes, Axure, Google Analytics and so on. Tools and deliverables, the stuff you would expect to see.

But is the ability to do a wireframe really a must have requirement for a good UX Designer? Probably not.

At this point you are probably saying what the fuck are you talking about, of course it is! Well, ok, maybe. But my point is doing the wireframe isn’t where a UX Designer adds value. Anyone can draw some boxes with enough common sense and a couple of hours watching some Axure training videos – and that’s the issue.

Why is the wireframe like that? Why the user would expect to see that thing dropdown there? Why is this button is aligned to the left? These are the sort of questions that a good UX Designer should be able to answer. 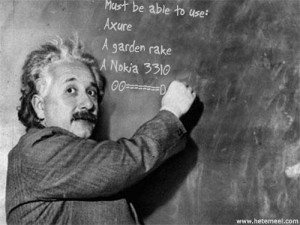 Companies shouldn’t be asking for a set of tools and deliverables in their job specs. Tools come and go. If someone has been in the tech industry in any capacity for more than five minutes they can learn a new tool, no big deal. It doesn’t impress me if you can use Photoshop, HTML, Axure or whatever it may be. Even deliverables change. Yesterday’s functional spec document is today’s user story.

Instead they should be focussing on how the candidates mind works. UX, being such a changing field requires someone who can think on their feet, can adapt and can solve problems as they see fit in a given time-scale or budget without being restricted by unnecessary processes.

A UX Designer who is an Axure god, dreams about Google Analytics and can make prototypes to blow you brains out might seem like a wet dream – but can they think outside the box? Will their skill set still be effective in 2-3 years?

So what is a UX Designer? 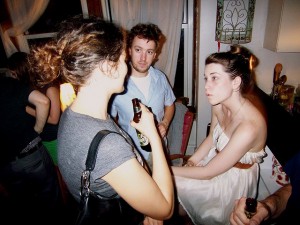 This guy says he’s a UX Designer…oh right – what did you have for dinner?

So what do I answer when someone asks me what I do? I used to just say Web Designer, but that’s because I can’t be bothered with small talk. However, now I say that I try to solve problems before they happen. You might be throwing up around now, or thinking of Minority Report (maybe the two are related).

It’s a bit of a poncy consultant type answer that doesn’t really mean much to the uninitiated. For that I make no apologies. if i’ve done my job well then nobody will really know what i’ve done. I learn, I understand (that’s the hard bit), I act.

Unfortunately I see UX Designer’s having to explain what they do for some time to come and we might have to just grin and bear it for the moment. But if we keep defining ourselves through the tools we use and the deliverables we produce, not only will we have difficulty explaining ourselves but we will end up devaluing ourselves too.

As follow up reading I recommend checking out Mark Lancaster’s article “What the hell do you do?” to see his attempt at explaining.

What the flaming monkey balls do you do? Let me know in the comments.