Opinion: The problem with UX conferences

UX conferences are becoming more and more popular. UX London, Lean UX NY, IA Summit, SXSW – the list goes on. They are great places to network, learn new techniques and hear the latest thinking from across the industry. But have they also become a place to show off to your peers?

Last year me and my strategy director did a talk and workshop session at Digital Shoreditch about digital tribes. We, as I’m sure all of the other speakers in attendance did, put a great deal of work into our presentation, carefully crafting our Powerpoint to try and get our point across in an easily understandable way to our audience.

I will confess that this was my first of such conferences. However, what I saw there and have seen since was somewhat disheartening, and something I feel is somewhat of an issue with the UX community as a whole. 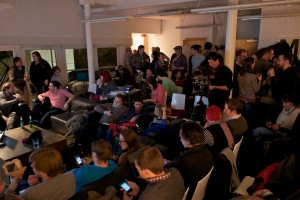 Rather than listening, and I mean truly listening to the material being delivered – almost everybody in the audience had either their laptops or phones out and were tweeting soundbytes. This was not just for our presentation of course, but for every speaker that presented.

Now I know we are a nation of multi-screeners, however the simple fact is if you are doing something on your phone or laptop then it is very difficult to fully absorb what is being said.

Each time there is a big UX conference my timeline is flooded by tweets such as “Mobile is part of a wider user journey [screenshot of powerpoint slide] @speakername #UXLondon” or similar. ORLY! That’s great, i’ll use that to guide all my future research, thanks for sharing. Wait…what?

Now you may be thinking, what’s the big deal, they are just sharing what’s going on for those who can’t attend. But simply passing around soundbytes like that without the context of the rest of the presentation isn’t helping anyone who can’t attend very much at all, and I would argue in some cases it’s simply trying to prove to their comrades that they are there.

It becomes reminiscent of watching an episode of Question Time where the guests are more interested in spitting out pre-fabricated quotes then saying anything which actually adds value or answers the audience members question, and causing David Dimbleby’s eyes to grow ever smaller.

I think it’s symptomatic of the UX field as a whole. Our field is still absent of the solid definition we so crave – you only need to read a couple of blogs to see the endless ways people are trying to define what we do.

That’s not necessarily a bad thing, it can bring us greater focus, identity and understanding. The problem is that in a similar way to teenagers trying different cliques until they find an identity that works, some of us have become guilty of a ‘look at me’ complex and the UX conference is where we stand around shouting at passers by showing off our UXey-ness.

Now don’t get me wrong, I am not tarring all UXers with the same brush here – some definitely tweet and give valuable information to those not in attendance, and to them I applaud. And I don’t even have a problem with UX conferences – valuable knowledge has surely been passed on at these events. But I wonder how much more would be shared if we stopped caring so much about showing people that we were there?

If you are going to take the time out to go to a conference, put your phone down, put your laptop away and give the speaker the respect of your full attention. There will be plenty of time to tweet afterwards, when you have absorbed the information and can turn those soundbytes into something more useful for your followers.

Are you a speaker at a UX conference? Do you tweet about them? Let us know in the comments.