Usertesting.com have just published a new report in which they detail the results of user testing sessions of thousands of users on mobile apps and websites.

I spoke to Michael Mace, a Mobile Strategist at Usertesting.com to learn a little bit more about the findings.

Companies creating mobile apps and websites often underestimate how different the mobile world is. They assume incorrectly that they can create for mobile using the same design and business practices they learned in the computing world. As a result, they frequently struggle to succeed in mobile

1. You make a strong case in the report for companies to redesign current offerings for mobile rather than just reformatting them. When budgets are tight and a complete redesign isn’t possible, what do you believe are the most effective ‘quick wins’ for creating a better mobile experience?

That’s a good question, but a tough one. The issue isn’t redesigning per se; it’s rethinking what users will want to do in a mobile setting, and then seeing how that changes what you your app or website does. Even if you have limited time, I’d put effort up front into thinking about that question, rather than just diving into adjusting features. If you do some quality thinking up front, that will let you prioritize the things you need to change for mobile. You then work your way down that priority list.

2. When speaking about the ‘fear’ users have of mobile apps with regards to privacy issues did you notice any difference in users views on privacy between those using Apple’s more closely quality controlled app eco-system vs Google Android’s more open one?

Not that we could see. The anxiety seems to be low-level but pretty pervasive.

3. Many of the issues you raise in the report still seem to be based around proper interface design taking into account the human factors of mobile interaction. Do you believe the rise of flat design will help alleviate some of these problems?

Only marginally. To the extent that flat means making graphics simpler and easier for a user to recognize, it may help, but you could easily do a flat design that still doesn’t take usability into account. In the iOS 7 preview, Apple showed white text on a light blue background in the Weather app. The fact that those colors were used in a flat design doesn’t make them any more
readable in bright sunlight. 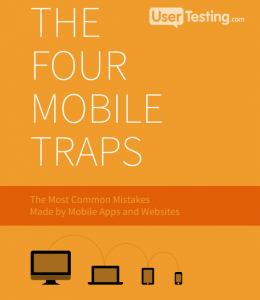 4. The fourth issue you raise in your report is that some mobile implementations simply aren’t engaging enough quickly enough to hold a users attention. With attention spans generally more limited on mobile vs. desktop what were the key things users were after seeing straight away?

5. Were there any findings that particularly surprised you in the course of this study?

The importance of help. Before the study, I thought the goal of mobile app design was to make the app so simple that help was not needed. After the study, I realized that no matter how great a design you have, people will sometimes get confused, so you must offer them help. Offering help in a mobile app is like installing seat belts in a car. Of course you don’t plan to be in an accident, but chances are it will happen, so you should plan for it.

If you’d like to learn a little more about usertesting.com why not check out the interview I did with Darrell a few months ago.

Usertesting.com has kindly let The UX Review release the report to our readers a few hours before it goes on general release.