One of the big challenges with introducing a new feature to a piece of established software is getting users to firstly understand it, and secondly use it. Introducing new functionality often involves introducing new task flows and mental models. I was recently reading Marli Mesibov’s excellent article on Multiple Intelligences and wondered if this thinking could be applied to better facilitate user uptake of new features and facilitate behaviour change.

What are multiple intelligences?

Simply put, people learn in different ways. Some learn better through visual aids (Visual-spatial learners), some through reading and writing (Linguistic learners) and a multitude of other ways which Marli highlights in her article. As User Experience Designers we need to understand how our audiences learn new information in order to introduce new things to them – this is often known as on-boarding. 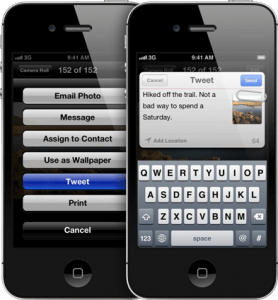 Sometimes a new feature or piece of functionality can disrupt the way a user currently works with a system. Managing behaviour change effectively is probably one of the hardest things you will have to deal with as a User Experience Designer.

A good example is the ability in Apple’s iOS mobile operating system to share photos directly to Twitter or Facebook from the camera roll app as seen in the picture to the left. Whilst this functionality has been around since iOS5, I rarely observe it’s use in the wild.

The established task flow for doing this prior to the functionality would have been:

I still do this. To me, if i’m dealing with a tweet I want to be in the Twitter app. It’s the way my mental model has set itself up and it is a learned behaviour. Learned behaviours are very difficult to change, even if there is a better and more efficient way of doing things.

So how can we use multiple intelligence learning to overcome these learning obstacles? For that you need to understand what type of learners your audience are. 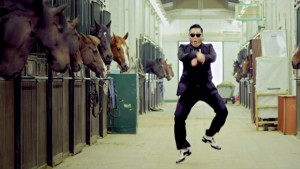 Let’s take you, dear reader. There is a good chance you are, at least to some extent, a linguistic learner as you are reading articles in order to learn about user experience. Therefore it would be a reasonable assumption for me to make that if I were to introduce a new piece of functionality to the site then the best way to get you to know about it might be a post or short article explaining the feature.

Lets assume for the sake of argument it is an email newsletter where previously the only option was RSS. Your previous behaviour and task flow might have been:

In order to disrupt that behaviour I need to convince you in a linguistically targeted way to start using my swanky new email based newsletters. Good ways to do that might be to list out the benefits, such as being less likely to miss content or to know instantly when new items are available.

Understand your audience and how they learn before introducing new functionality to them. Tailor your on-boarding content appropriately and think about the best ways to get across the benefits of your new feature. Multiple Intelligence gives us a powerful tool to understand the best way to communicate with our users and used effectively it can maximise the impact of a new feature and help drive behaviour change.